A Canal Ran Through It

There was little on the surface of this low spur of land overlooking the Basento valley and the coastal plain to indicate the extensive multiphase site that lay below. A few fragments of roof tile and pottery had been exposed by the plow and by a trial trench of the Soprintendenza made in the fall of 1973.

The site known as Pantanello (“little swamp”) gave up its secrets slowly, and in the case of both the Upper and the Lower Sanctuary, grudgingly. This first excavation campaign by the Institute of Classical Archaeology concentrated on the Tile Factory. By the middle of July, its east-west extent had been determined, but the discovery of the kilns was yet to come (see the 1975 campaign).

The Sanctuary site beside the modern canal was first identified as such in the course of the 1974 campaign. The concrete lining of an earlier era had been removed from the canal—which had been cleaned and widened—along with some eucalyptus trees, exposing a fresh face of bare earth on either side of the canal. The fresh cut had widened the canal and created a bank that was more than a meter high. Below the rich black soil of the overburden, at a depth of 60 cm beneath the canal’s upper edge, our cleaning revealed a continuous layer of roof tiles embedded in the banks on both sides, for a considerable distance. 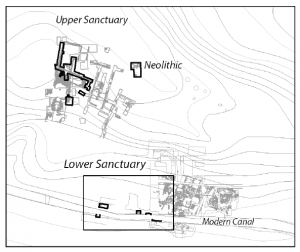 On the south bank, fragments of coarse pottery—including distinctive carinated lekane rims—were protruding. Further along the bank to the east, at the point where the Spring joined the canal, the pottery and roof tiles diminished. The archaeological level was more or less continuous, and visible for approximately 35 m. It extended from below the westernmost extent of the large structure on the hill, the “tile factory,” eastward to a point corresponding to the eastern edge, as it turned out, of the Sanctuary.