This page contains the transcribed notes from 1974 Pizzica Field Notebook 1.

Many surface finds. The group from Lecce V arrives. We continue to follow the transverse wall Beta–W into square XXXIX. Our 1.70 m wide trench uncovers a strip of Room 2 about 1.25 m wide. Our trench and the trial trench of October ’73 parallel each other. The excavators succeed in following the wall perfectly, missing it by several centimeters. The two trenches together cover an area 2.70 wide and the October trench lies bare to the hypothetical.

Level of the fall (had it extended to the north) of Room Gamma. In fact, the tile fall appears not to have extended further than 4 m north of Wall Alpha–N. To the east of Beta–W in Room 2 as noted, the tile fall is scarcer. It extends only to about 3.30 m north of Alpha–N. While cleaning the tile fall, under the tile a complete (nearly) ungentarium.

Find: Unguentarium, complete except for some breakage around the rim. Neck painted red, red streak on body; 1.30 m north of Alpha–N and 90 east of Beta–W. The tile fall is level with Beta–W. The full extent of Beta–W, measured from the southwest corner to the northwest corner, is 7.45 m. After N it turns back east, but there is no indication of any wall going west. The corner is very clean and the east–west wall Beta–N seems in good shape. An extensive file fall to the west of Beta–W, there is approximately no wall on the north to support the roof.

We decide rather than looking for the north wall from above to search for the west fall from below by putting a trench west along the line of Alpha–N. This trench will attempt to discover the westward extend of the tile fall evident in the wall of our early deep trench in XXVI–W. See notes from 1–2 July.

As we go the tile fall is cleaned. We discover a north-south wall, Gamma, just where Giuseppe indicates it will be. It is a looser construction than Alpha–N (larger stones, tightly-packed with two sharp faces, mostly carparo and occasionally the harder field stone). Alpha–W (squared blocks of carparo 40 cm across top) or Beta–W (similar to Alpha–W but with less carparo in proportion to the rounded field stones) but the wall has the same width: ca. 45 cm.

Work begins about 7:10. Make more friendly noises with Cremonisi. Show him our huts and the spring; he shows us a pit with classical material, invites us to come over. We invite him over.

We extend the trench to the west balk of XXVII and start north along the line of the wall, leaving a meter on either side. Still in XXVII. The tile fall appears to continue to the west of the Wall γ.

I open a trial pit in the southwest corner of Room 2 where we have found vases. To the east were the discoveries of 2 July, to the north of the unguentarium of 9 July. The pit will measure 1.30 m by 1.30 m and will now extend farther to the east than the wall of the trench along Wall Gamma.

Make two battute. Below the tile layer 2 is composed of dark earth with many small stones, no material.  Wall γ continues up the hill. We have already passed the corner of Beta–W/Beta–N going north. The top of the wall is covered with carefully placed small sections of T–C tile. It measures 48 cm wide in three places measured; this corresponds exactly to the width of the carparo blocks with plow marks. The tiles, it becomes clear, were used to level the wall for the next course, as stones belonging to the wall are found over them and in situ (photographs). The corner where the wall turns east is discovered 11 July at 7:04 AM.

Work begins with Giuseppe and Alfredo 2 (general strike promised for today has gotten Alfredo 1). Continue northward. It is apparent that the wall continues northward. No material. What appears to be a transverse wall at 8 m from the east-west trench where γ was discovered, turns out only to be part of the fall. The wall continues and we follow it another before abandoning the chase at lunchtime. Mario, the specialist for the Lecce group, comes over. He, Giuseppe, and I discuss the walls and their different construction, and decide that Alpha, Beta, and Gamma represent various periods or phases of construction, based on the use or non-use of tiles.

Group from Lecce (Cremonisi left yesterday) continues to find pits full of Classical material. Group from Lecce excavates our Hut B, finds tiles, map part of area a but. but like the other pits

Begin about 1:15 PM to clear soil off (topsoil) the tile fall. This part of the tile fall is in the ravine off the wall which has carried material from above XII–W 1.

This is the downhill side of the tile fall and as we dig further down the hill the layer of tile is deeper and deeper. The soil is also harder, slight;y darker and more clay-like, possibly as a result of the water shed in the rainy season. Tile fall encountered at a depth of 26 cm to 35 cm from ground level.

Asia and I go down to the canal wall. We observe a great deal of pottery for the bank about 15 m down the canal from the point where two great stones laid side by side emerge from the bank of the canal. I clean these stones and on the opposite bank I find two other sets of stones, oriented obliquely to the banks, angled about 45° in a south–east direction.

Asia excavates a deposit of vases, broken and embedded in the stream bank about 15 m downstream. These are in the grey mud which forms the lower part of the bank (low water in the afternoon, because most is being used for irrigation). Mostly un-glazed ware. Very thus BG inside large coarse red vase. This in turn it would appear covered with a large yellow vase. Bottoms of two B–G cups.

This is not a random collection of sherds, but it would appear that canal was cut through a deposit (pit) or through part of a house.

Begin to excavate on the north bank over the large blocks, cleared yesterday. They are about 1 m below the soil. We lay out a trench 2.0 x 4.9 m, northwest–southeast axis of trench mashes and the angle of 20° with magnetic east–west.

We lay the trench out so that it is parallel to the canal, and leave a balk of 50 cm between the canal and trench wall. Above the trench to the north is the bank of earth about 1.5 high thrown up by the canal cleaning machine. The treads of this have passed over our trench, making the ground very hard. Above, the north-west corner of the trench is a large squared block measuring, which may have come from the structure in the canal. The northwest corner stake of the trench is 61.35 m from the concrete bridge over the canal (to the west).

The blocks on the south bank are 4.40 from the south–west stake of the trench. The blocks appear to emerge from the bank in a north–east direction, 25° to the east of north. They appear to be aimed right at our southeast stake.

If, however, they are aligned with the large blocks which seem to be the eastern wall of the structure then they belong to a wall which makes an angle of approximately 50° with north. These large blocks are just inside our south–east stake.

The west wall ought to correspond to the block which emerges from the north bank m west of the “eastern wall”. 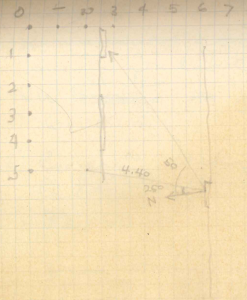 Three workers continue the trench on the north bank of the canal. At 60 cm below the grass, they reach a layer of grey clay. Tiles, lots of bones appear. Adamesteanu visits:

In the grey few blocks appear at the level of the blocks in the canal wall. On the east end of the trench we go below the level and only tile and bone appear. We are at a depth of below the southeast stake.

At the west end, several large blocks of pudding stone run north–south through the trench. A number of tiles at the same level. We are below the southwest stake.

In the afternoon, three workers continue to deepen the trench. We encounter large rectangular blocks      m of carparo. It is only       cm thick. Other stones perhaps belonging to a wall. They are located for the most part in the western part of the trench. Is this fall from a wall located to the west? We decide to investigate the large block across the stream which Alfredo began on Tuesday.

Asia, Catherine, and Nelson work on plans of trenches. It is very hot and everyone is ready to quit at 4:00 PM.

We continue to work on the blocks across the canal on the south side. It turns out not to belong to a wall. We open a trench above the tile fall beginning at 82.5 from the bridge. The trench is        m long and wide and flanks the trench without balk.

Finds 20, 21, 22: Nelson and Catherine are in charge of cleaning out the pit on the Lecce side of the caterpillar cut where the millstone and basin were found. In the afternoon I begin to scrape the bank where Saturday I found the small vases, and I find two more patera and a small amphora.

We uncover the tile fall. It rests on a mass of stone (Archaic wall construction has this kind of stone: see Amendolara). It is apparent that we will have to excavate a great deal more in order to be sure that it is in fact a wall, and in which direction it runs. It appears to be oblique and run in a southeast–northwest direction. This we decide to do not now, but next year. The workmen are tired of digging here. It is  hot and the soil is hard and does “yield” much.

Giuseppe and I searched out a likely spot for a tomb on the north flank of the hill. We begin to dig a north–south strip about 1.0 m wide and 5.0 m long. After about an hour we hit it.

Flat slabs on either end, three rows of curved tiles. All tiles are broken from the pressure of the earth. The curved tiles are unusually large and reach way into the ground. The tomb is 180.0 long, 0.80 wide and 50.0 high. Tile which covers the east end is intact except for small crack. That at the west broken in several places. It is clear that the curved tiles were one piece and have a diameter of 80 cm.

The top is removed. The entire tomb is filled with fine soil. The feet are uncovered first. The body is oriented with the head to the west, facing the rising sun. Behind the head is a small lekythos (Find 23) with a missing handle. Sifting does not reveal it. Placed in the tomb, broken, a small cup (FIND 24) with one handle found. Removed skeleton and found amber signet ring (Find 25) on the left hand. Boy 1.42 m high.

About 30 cm to the north of the tomb, about 30 cm below the topsoil, at a slightly oblique angle (?) the post hole of a hut, Hut D. We save the wood of the post. NB: at the same level, a flint blade (Find 26), neolithic. The post hole is surrounded by a dense mass of irregular stones which form a layer that slopes upward to the east.

Continue in the area of Hut D. Another post hole to the north and extensive bit of wood. It is suggested that the stones resemble the Iron Age burials of Mass Incoronata.