The Channels of the Spring 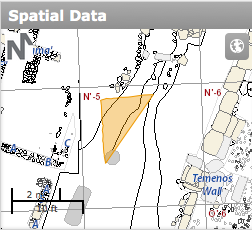 The areas to the west and east of the wall were excavated separately. To the west, the archaeological materials from below the top of the wall were all Archaic in date. We thought at the time that this represented the fill, built up over time, of the area between the temenos walls of the sacred Spring at the heart of the Sanctuary (which was finally revealed in 1978).

As the excavation reached virgin soil beside the monumental wall, the narrow source of the western channel appeared 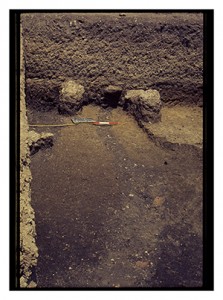 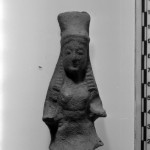 he was surrounded by miniature votive vessels. The more extensive area on the west side of the channel (Fig. 4.56 [PZ77_b60_p29_f20A]) was in fact a votive deposit (see [ark_link asm=PZ_77.1101]) with Archaic material of 6th-century BC date and a unique fragment of an olla of indigenous fabrication (see [ark_link rgf=PZ_4826]); votives came from the same context, a miniature skyphos and two phialai). 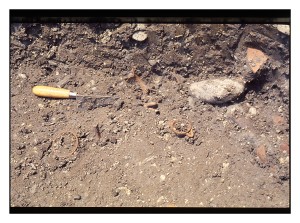 This is one of the few sites so far explored that offers well-documented proof that a Greek sanctuary in the chora was frequented also by the indigenous inhabitants. It should have come as no surprise.